More new connected glasses! These don’t promise you to see the world differently in augmented reality like the late Google glass. No, they just allow you to listen to your music. The process is quite bluffing. Just put on your sunglasses, press the button under your right arm. Paired in bluetooth, like any headphone or wireless headset, the Bose Frames become this hybrid product, between sun protection and audio headphones without anything in your ears, thanks to the speakers housed in each branch.

Lightweight, these glasses make you want to show this incongruous gadget to your entourage. They are especially useful for bicycle or scooter enthusiasts in the urban jungle. If headphones and helmets remain a risky practice, even suicidal, because you do not hear other road users, the connected glasses Bose Frames do not cut you from the outside world. So a music bubble surrounds you, without isolating you from the outside world. This allows you to listen to music while riding your bike or scooter. And no one can hear you around you at moderate sound.

These glasses have of course also a built-in microphone. You can pick up the phone by pressing the button under the right frame. Or make a call, dictate a text through Siri or Google Assistant. On the other hand, the Bose audio glasses have only 3h30 of autonomy. They require 2 hours of full recharge, via a USB charger.

The effect waouh is well there the first minutes… until looking at you in a mirror. If the sound of the glasses of Bose is rather bluffing, the look remains very massive. That it is the version alto, square frame, or rondo (round), the frames are very important. Far from the look that we can expect from sunglasses at this price range. If we want to harden the line, the Bose Frames make think of 3D glasses.

Bose has announced a platform of augmented audio reality, still in its infancy, associated with applications that offer information on monuments near you through geolocation. For now the associated applications are only available on iOS.

Remains a perfectible sound, especially in the bass. The glasses are not polarized and cannot be replaced by tinted lenses for eyeglass wearers.

In short, the Bose Frames are an interesting initiative from the American audio manufacturer… which succumbs to the inherent flaws of a company that is not used to building sunglasses. A new version or a collaboration with an eyewear manufacturer, in the future, should make it possible to improve these defects of youth. 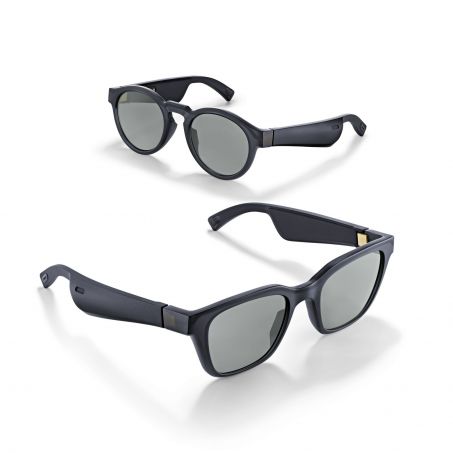