This is not the story of the capture of Pablo Escobar. Much more humbly, the story takes place in Paris. It features a Btwin Triban 500 bike, the national police, a thief, a GPS tracker, video surveillance cameras and the BAC.

Last November 20, after returning from my lunch break, I realize that I have several notifications on my smartphone. “Your bike is on the move Rue La Fayette in Paris”. First thought to emerge: the GPS tracker I had installed two weeks earlier on my bike is not working. Because my Btwin racing bike must be parked on Avenue Bosquet, in the 7th district of the capital, in front of the editorial office. The situation being strange, I decide to go and see the place where I had left my means of locomotion. All of a sudden, nothing. Neither my bike, nor even a trace of the U lock that was holding it to the metal barrier in the street. Back to the Invoxia GPS tracker application that I had sloppily installed on my bike to test the product. The bike is still moving, it is heading towards the north of Paris and Saint-Ouen.

“Not in an American movie”

So what do you do when you see your bike slowly, inexorably slipping away from you? Go get it with a VTC/scooter to retrieve it on your own? I’m not into combat sports. Nor am I a fan of personal vengeance. So I chose to trust the national police.

Police station of the VIIth district, I explain my situation to the person of the reception trying to emphasize the urgent character of my request. “Sir, we are not in an American movie. The French police have other things to do than catch bike thieves.” Well, the rest of the story is actually a bit like an American movie. Two hours later, while waiting for my turn, I manage to file a complaint. As luck would have it, I run into a peacekeeper who is very attentive to my modest case of bike theft. “We will try to find your bike with the tracker. I found one last week with another tracker.” When filing the complaint, I had to request a court requisition so that law enforcement could ask the company that produces the GPS tracker, Invoxia, to be able to access my tracker data in real time. I also had to provide my login and password. Useful advice: try to avoid jokes or insults in your passwords…

The police contacted me in the afternoon. “Sir, are there stars on the frame of your bike? No, I assure you, there are not. So the police tried, I think, once to find my bike thief while he was moving towards the Goutte d’or. False alarm for the bike with the stars on the frame.

Below, the tracker that charges via USB and fits inside the reflector that sits under the seat. 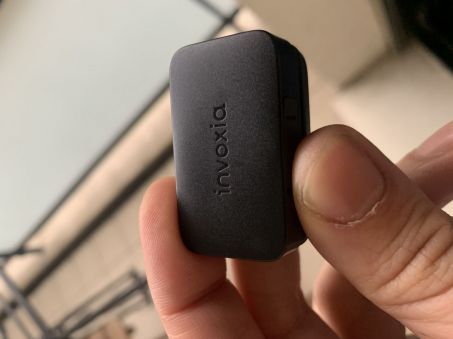 From 6pm that evening, the GPS sensor is stopped. Two solutions. The bike thief took it off when he discovered the tracker under the saddle. Or he is resting after a busy day at work.

The next morning, when I wake up, I realize that the tracker is back in use. The bike has been riding between 5 and 7 am between Stalingrad, Aubervilliers and la Goutte d’or. The thief is therefore a Sarkozist follower of “France that gets up early”. After a few peregrinations, the bike apparently stabilizes in front of the Lariboisière hospital. I receive a notification from the application associated with the tracker telling me that “The bike is stopped for 2 hours”. After discussions with the company that produces the tracker, it advises me to go to the location of the bike and to put an anti-theft device to prevent the thief to leave with it.

I do it. Arrived on the spot, two messages of unknown number. “Sir, especially do not go on the spot, the colleagues of the BAC are in hiding because we found the individual thanks to the cameras of Paris. The bicycle is currently stored. We are waiting for the gentleman to come out and get it so we can arrest him.” Stunned, I listen to the message again to be sure I have understood correctly because the scene seems surreal. The police used the video surveillance cameras of the city of Paris to find my 500 euros bike. But it doesn’t stop there. A crew of the BAC, policemen in plain clothes, is waiting not far from my little queen in order to catch the thief “in flag”. On the spot, I am rather reassured as for the chances of success of the operation of recovery of the bicycle, and at the same time rather frightened by the means implemented for a so modest good. I am almost embarrassed by the deployment of so many human and high-tech means for such a modest matter.

Telephone call in the afternoon. “Sir, can you describe your bike? I do it. A photo received by message later, indeed, it is my bike that the BAC has just recovered. Relief. What about the thief? “In reality, he seems to have left your bike in front of the hospital without tying it up. Then he came out of another place. We think he must have sensed that he was being followed.”

Result: less than 24 hours after the theft, I get the bike back at the police station of the 7th district. The police show me pictures from the video surveillance cameras of the individual on my bike, just before dropping it off in front of the hospital. Then comes a joke from the police officers of the BAC: “It works well your tracker. If I had known, I would have installed one on my wife.” Exchange of dismayed looks with the peacekeeper who handled the case and whom I thank.

Installed two weeks before the bike was stolen, admittedly I was wrong. The GPS Bike Tracker from the French company Invoxia that I was testing allowed the police to locate and recover the bike. The price of the Bike Tracker is important: 149 euros. Clearly it can be justified for electric bikes or racing bikes. The accuracy of the tracker is quite impressive. A mode allows to alert the user as soon as the tracker detects a change of inclination. Specifically, parked in a bike park, you receive a notification as soon as another user takes or drops a bike next to yours. So the tracker saved me from buying a new bike. A nice Christmas story at the expense of the French state.

Even if the timing and my testimony may arouse the suspicion of the most seasoned minds of media practices, this paper is not brand content.

If you want to follow, with screenshots, the journey of the bike:

Something amazing is happening to me. I just had my bike stolen this afternoon. And since I put a tracker underneath that I’m testing, I can follow my bike in real time back to the North of Paris. And I’m waiting to be received at the Commissairiat to see what we can do.